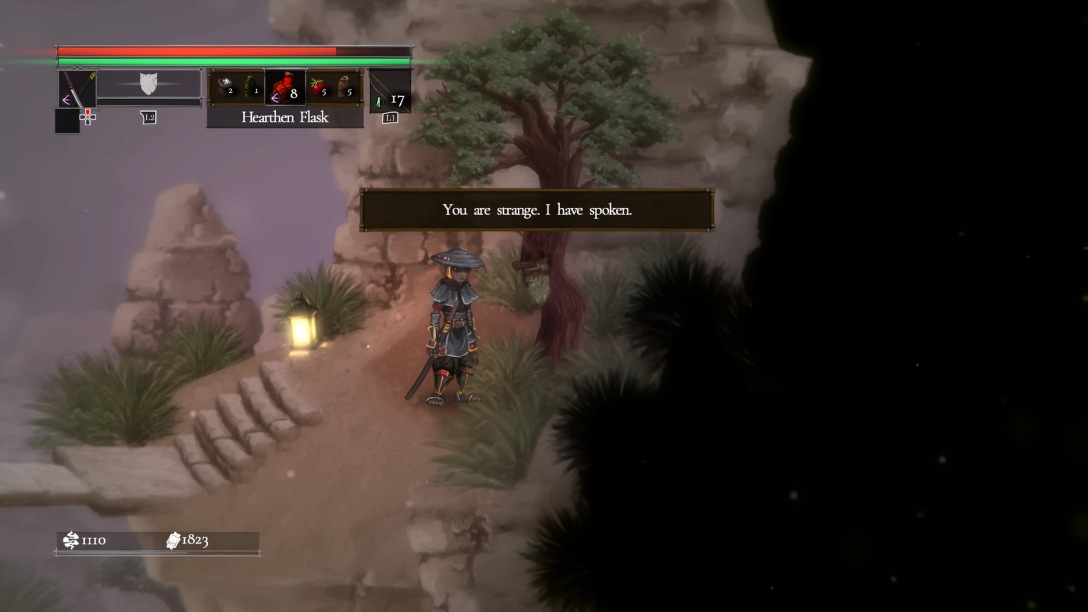 I’m on my fourth run of Salt and Sacrifice. I’m having a lot of fun. Some of the most fun I’ve had with any Soulslike. The Mage hunts are a wonderful addition to Soulslikes. I’m often putting off hunting the designated mage, running down every other mage that spawns before finishing off the one I was after in the first place. Salt and crafting parts abound. Getting a build to come together is a pretty simple task. With that taken care of, it’s easier to take in the rest of the game – things like lore and world navigation. I would talk about the combat – I’m having a blast with it – my current character, Nagato the Hammer Women is crushing skulls – but I’m figuring out how to talk about it. Some things have changed from Salt and Sanctuary, some things have stayed the same. I’ll figure it out at some point.

The lore – how it’s delivered – is pretty much the same as Salt and Sanctuary. I never talked about it before, so I’ll do it all here. Lore is delivered by the tried-and-true pillars established by Dark Souls. Those being NPC’s rambling about random but not so random stuff and item descriptions. The Salt series has lore coming from three other sources – the bestiary, the skill tree and item descriptions.

Lots of people have vocalised a desire for From Software to have bestiaries in their games owing to the variety of enemy types and their appearances. It’s fun to look at that stuff without the fear of being stabbed. The Salt series has such a bestiary (as does the Nioh series). It starts off empty, but as the player encounters more and more enemies it fills up. Each entry has a picture of the foe, the items they drop (this fills up as items are picked up), a little flavour text and how many times the foe has been disposed of by the player and vice versa. Everything is there. It’s fun to look over. It’s also good to see which enemies are causing problems and which one’s aren’t a problem.

The skill trees in the Salt Series aren’t as complicated as they look. They are simply a glorified Dark Souls stat system. Nodes correspond to stats, weapon and armour requirements – simply input level ups into the nodes for stats, weapons and armour you want. Simple. Also, every few level ups you get an item that lets you take back a level up and assign it somewhere else. Pretty neat for when you want a specific point but don’t need the stuff leading up to it. For example, a strength build that picks up some dexterity on the way can refund the dexterity and put it somewhere else. Another cool thing is that while there are points on the skill tree that give health, investing in any stat gives the player an amount of health – really helps to get a build off the ground pretty quickly.

In addition to being a stats system, the skill tree offers lore. Each node has a separate section which has a bit of flavour text – little stories that recall events from elsewhere in this world. These are numbered – they are sections of larger stories. Every node of the skill tree comes together to form a tome of stories. I dig here and I dug it in Salt and Sanctuary. I would love to read them as a compendium. That would be something special.

The item descriptions work a lot like the ones in From Software titles. Except with the armour. Normally, From Software will give one piece of armour the big item description and the rest get generic filler text. In the Salt series, every piece of armour gets unique flavour text – each piece shining a light on the armour’s previous owner or the faction who owned it. The extra information is nice – it does a lot to flesh out the mages even more.

Moving on from lore stuff, I want to talk about moving around. Salt and Sanctuary and Salt and Sacrifice are metroidvania’s. Salt and Sanctuary had some movement abilities – a double dash and a wall cling. Salt and Sacrifice gives the player the wall cling from the get-go but has a whole new set A brief note on things that aren’t about delivering lore. Salt and Sacrifice shares being a Metroidvania with Salt and Sanctuary. That means gaining abilities get around the level and open up new pathways. The wall grab from Salt and Sanctuary carries over, but that’s about it. Everything else is new. Actually, one thing sort of carries over. In Sanctuary, lighting a torch would make mist like platforms solid with a special ability. In Sacrifice a special object, when activated in special stone circles will conjure tempory platforms. That aside though, all new. Which means no double air dash – that was cool, but there is cool stuff in return so it’s all good. The coolest being the grapple hook. Grapple hooks make everything better. It’s a lot of fun swinging around. Plus, the extra verticality gained from the grapple hook points is nice – vertical level design is never not welcome. Not that I think about it, a lot of these additions result in more vertical level design. It’s no wonder I’m liking Salt and Sacrifice as much as I am.

There are streams of magical air that can only be ascended while holding a magical cloth. The magical cloth is also used to safely get down them – breaking the fall. And there are abseiling points. I do dig these. The way the player character kicks their legs out when going down and up them – it all looks so much fun.

There’s lot to like here. And I’ve not talked about the combat yet.

A person who enjoys writing short story things, poetry and other random things that come into my head. View all posts by skyraftwanderer